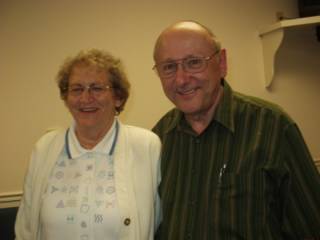 Linda and Eddie Mensinger, veteran missionaries to Africa, last night told a gripping and emotional story of their recent time in Africa as Eddie closed out his official ministry there as a seminary and Bible Institute teacher. After spending three months in the Cameroon, Eddie was able to return to the war-torn area of the Central African Republic to teach for five final weeks, courses in Brethren Beliefs and Practices, Major Prophets, Church History, and more. Though their former housing–and much of the mission compound–had been destroyed in the fighting, Eddie stayed in student housing and told of students who had only enough food for one meal a day, few or no books or notes, and other hardships. He participated in the Bible Institute and Seminary graduation that saw 81 graduates, including approximately 40 going into pastorates, conclude their schooling in a ceremony held indoors because of the rain–2,000 attended but the chapel would seat only 200. Only a few were able to attend the graduation banquet because of a lack of food, and many of the graduates told stories of being beaten, clubbed, threatened with assassination and other great hardships. Teachers are many months behind in their pay. Three prayer requests, according to Eddie, are (1) funds to renovate housing by the opening of school on October 1, (2) funds to print lessons for the students, and (3) each student must bring 1/3 of their tuition in order to be permitted to begin schooling in the new semester.