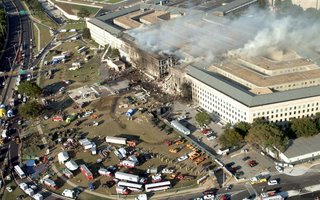 Sixty years to the day after groundbreaking at the Pentagon, hijacked American Airlines Flight 77 crashed into its west side at 9:37 a.m. on Tuesday, September 11, 2001, killing all aboard as well as 125 people within the building. The flight penetrated three of the five rings, but because the affected area was under renovation at the time, several offices were unoccupied, saving many lives. (photos by Scotty Boatright of Fairfax County Fire and Rescue Department)