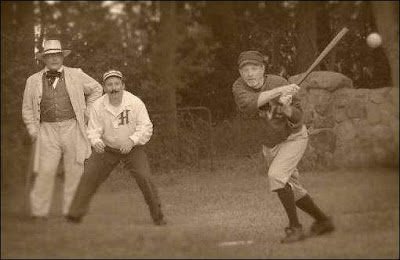 Ron “Topless” Henry (batting here), who is also on the staff of Grace College & Seminary in Winona Lake, Indiana, is one of the players featured in an article in this morning’s Fort Wayne newspaper on the 1862-era base ball team Winona Blue Laws which plays in a league in northern Indiana.
Here is a brief excerpt from the story. To read the entire story click on http://www.journalgazette.net/apps/pbcs.dll/article?AID=/20070729/FEAT/707290454
The Winona Blue Laws’ name is similarly historically inspired. It comes from evangelist native Billy Sunday’s penchant to legislate against non-religious activities on the Sabbath.
Notable Blue Laws in Winona Lake included no alcohol, no swearing or spitting in public and no dancing with members of the opposite sex. And of course, no boating, carriage rides, conducting business or swimming on Sundays.
Ballists and their fans – called cranks from the practice of turning a crank to tally admission to games – delight in the lingo, dress, manners and customs of another era.
Batters are “strikers;” pitchers, “hurlers.” A “daisy cutter” (sharp ground ball) might well drive in an “ace” if and land you on first “sack” if you “leg it” and the “behind” happens to “muff” the throw.
If there is no crying in baseball, in this brand of baseball, there is nothing so crass as errors. . .

. . . In vintage games, a batter must hit the ball safely to get on base – there are no walks, and indeed, no called balls or strikes, although a batter can strike out swinging. There’s no stealing a base, no sliding, no leading off a base, no advancing after a catch.

Balls caught in the air or on one bounce are an out. That’s the case – whether the ball is a one-hopper to the rover (or shortstop, and the only player allowed to move before a ball is hit) or, as happened to one ill-fated Hill Topper, whether the bounce is off the roof of a garage in deep center field.
Social Share