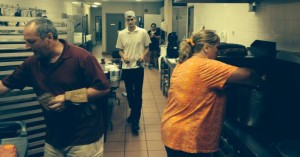 Participants in the Great Canadian Adventure helped with projects at Heritage Bible College.

Groups from four churches in Ohio and Maryland participated in the 2014 Great Canadian Adventure, which is sponsored by GBCanada. Held from June 29 – July 5, 2014, in Toronto, Ontario, Canada, the focus of the week was training in evangelism, providing exposure to the ministries in Canada so individuals know how to pray, and serving in various ways throughout Toronto, Mississauga, and Cambridge.

“The teams helped us mostly with building bridges in the communities we where we are working or hoping to work,” said Phil Bryant, pastor of Community of Hope, a Grace Brethren congregation in Surrey, British Columbia, and the director of the week.

“In Toronto, they connected with several ministries where we have ongoing relationships,” he noted. “This bridge is exciting and needful if we hope to plant a church in Toronto in the future.”

In Mississauga, the teams worked alongside the Mississauga North Baseball Association at their facility. “With the team of 30 people, they were able to make a huge impact. It was an amazing connection in the community,” said Bryant.

In Cambridge, the group completed several service projects with community organizations, as well as at Heritage Bible College. They also conducted neighbourhood surveys to take the spiritual temperature. “This is helping us to decide if we start a work there,” noted Bryant.