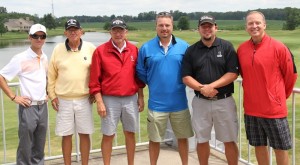 The winning group of the 2014 outing, pictured with Trent Barlow (left) and Chad Briscoe (right).

The winning group of Christian McCray, Rich Dick, Matt Dick and Bill Musser fired a -18 to repeat as the tournament champions on a brisk July day.