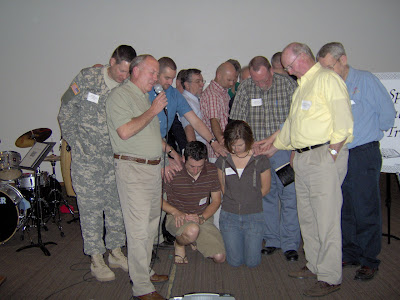 Jason and Doni Weimer (kneeling) from the Waterloo, Iowa, Grace Brethren Church (Kelvin Cooke, pastor) were commissioned yesterday at the Iowa/Midlands district conference as “receiving missionaries” for a team of Grace College students soon to depart for ministry in the Philippines.
The Weimers, who previously spent a year ministering in the Philippines, will be orienting and acclimating the nine Grace students and Grace staff member Scott Feather to the Philippines, and then will go on to Japan for additional ministry before returning to the States.
Jason’s father, Ron Weimer (standing at left, with microphone) is on the pastoral staff of the Waterloo church and offered the dedicatory prayer for the Weimers.
Scott Feather will be blogging the experience at www.esfeather.com and invites any who are interested to track the team’s progress on the blog. His first post will be this Friday–the group leaves Sunday.
Social Share