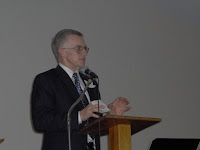 Pastor Edwin Jordan (right) of the Pleasant Grove Grace Brethren Church in North English, Iowa, was the moderator for this year’s Iowa/Midlands district conference and also conducted the district’s business meeting.
The conference, held yesterday (Sunday, April 29) at the East Iowa Bible Camp in Millersburg, Iowa, attracted lay and clergy leaders from all the churches in the district except Longview, Texas.
Each church had opportunity to give an update on its ministry, and to present special music. Roddy Ehrhardt, who is planting a church in Ankeny, Iowa, gave a report and a special offering was taken to help fund the new church-plant. Pastor Randy Todd, who replaced Ehrhardt this fall as pastor at the Dallas Center church, spoke of the partnership the two have, and Ehrhardt credited Todd’s previous church-planting experience in Ohio with helping orient him to starting the new Ankeny church.
Other representatives giving reports at the conference included Kevin Ong from GBNAM’s International House in San Francisco, Steve Galegor, Sr., representing CHIEF Ministries to native Americans, and Terry White, representing Brethren Missionary Herald Co. in Winona Lake, Indiana.
Videotaped updates and greetings were present from the Jim Momeyer family in France (preparing for ministry in Africa) and from the Raolph Justiniano family in Japan.
Special note was made of thanksgiving for Kim Cooke’s heart surgery of a year ago (she will be running a 5K on May 19) and prayer was offered for the upcoming surgery and cancer treatments for pastors Gary Austin of Cedar Rapids and Howard Johnson of Davenport.
A fellowship meal in the camp dining room followed the conference. Next year’s moderator is K. Howard Immel, pastor of the Carlton Brethren Church of Garwin, Iowa, and next year’s conference will be held in the Garwin area.
Social Share