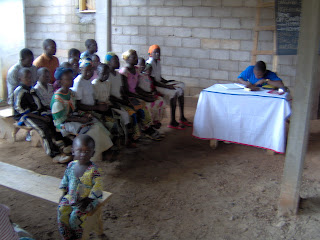 The choir (left), which included both young people and some older ones, was already singing and ministering when we arrived, well before the service. They sang at several points in the 2 1/2 hour service, as well.

The young man seated at the table at right seemed to have two jobs–one was to record attendance and offering, and the other was to post it on the chalkboard behind him as soon as figures were known.

Though only several weeks old, the church seemed well-organized with many people having specific duties and performing them well and without instruction. Two “responsibles,” Silas and Emile, led the service and did a very fine job. At least three languages were used — French, Laka, and Sango — and perhaps more that we did not recognize.