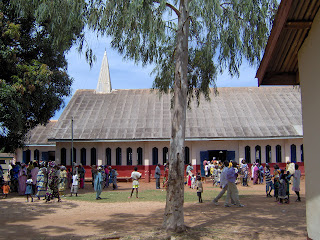 Following the service at Galabadja 3 and tea at the pastor’s house, we stopped in at the Castor church (pictured) which is the largest and most prominent Grace Brethren church in the CAR. It has about 3,400 attenders in the two services (Sango and French) and the Sango service was just concluding as this photo was taken. The Castor church was pastored for many years by the late Noel Gaiwaka, who is credited with starting more than 80 Grace Brethren churches in Bangui and surrounding areas.
Social Share