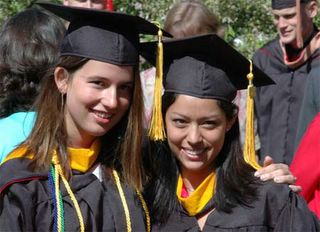 The following graduation wrapup report is excerpted from the weekly e-mail published by Judy Daniels in the Grace alumni office. To subscribe to the Grace Connection, send your e-mail address to connect@grace.edu

Last Saturday morning more than 2,300 people attended the 2006 Grace College and Seminary Commencement ceremony, held in the Gordon Recreation Center on campus in Winona Lake, IN. To see photos of the graduation events, visit <http://www.grace.edu/photogallery/commencement-2006/>.

Twelve Korean students are on campus this week and next, taking classes toward their doctoral degrees. The students are here under the Korean Studies Program, a cooperative arrangement between Grace Seminary and the Holy Way Institute of Theology in Seoul, South Korea.

Accompanying the students is Dr. Choong-Woong Jin, president of Holy Way Institute and director of the Korean Studies Program. Since 1997, Korean students have been earning their degrees through this program, taking some of their classes in Korea and the remainder at Grace.