Transfer of Leadership Complete at GBIF 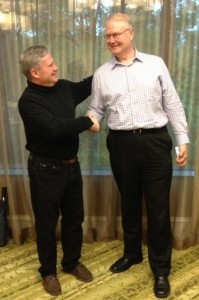 Since 1977, Larry helped facilitate the growth of church planting across the United States and later into Canada. He served alongside other visionaries such as Lester Pifer, Ralph Hall, Frank Poland, Bob Thompson, and our missionaries to the Navajo. In the 1980s, Larry was instrumental in bringing the military chaplains of the Fellowship of Grace Brethren Churches under the umbrella of then Grace Brethren Home Missions and establishing the ministry of the Eagle Commission. In 2004, Larry successfully led the two organizations of GBNAM and GBIF through a restructuring process, in response to legal advice, and a new board of directors was formed.

Larry provided strategic leadership to the GBIF in its development along the way, working closely with Walter Fretz, Jim Johnson, and most currently, Ken Seyfert. In 1989, Larry began the work of gaining compliance with state securities laws and drafting our initial prospectus. In 1977, total GBIF assets reflected $11.1 million. At the end of 2012, assets totaled $97.1 million, with $88 million in customer investment accounts. From this incredible growth, over $10.7 million has been returned to the ministries of the FGBC by way of goodwill contributions, the primary focus being church planting and outreach in North America.

Larry expressed his gratitude for an incredible journey and sense of calling and now looks with anticipation towards his retirement.

Kenneth A. Seyfert has assumed the position of CEO for the Grace Brethren Investment Foundation, Inc., as of April 18, 2013. Ken was selected to succeed Larry by the Board of Directors last November, and was named President-Elect at that time. Ken has served the GBIF for over 15 years, overseeing daily operations and management of the investment and loan portfolios.

In addition to his responsibilities at GBIF, Ken serves as chairman of the FGBC Retirement Investment Plan and is an active member of Winona Lake GBC, serving on an advisory committee to the Board of Overseers.

The Board of Directors for the Grace Brethren Investment Foundation, Inc., simultaneously expresses its heartfelt appreciation and congratulations for Larry’s exemplary contribution to the Fellowship of Grace Brethren Churches over the past 36 years, along with an enthusiastic and warm welcome to Ken as successor CEO to the GBIF.