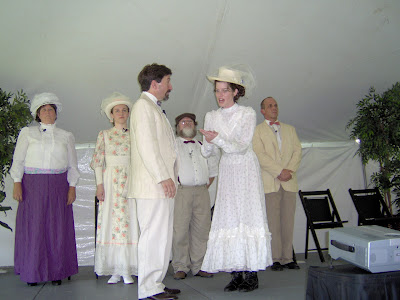 In the tent, a group of six thespians performed a humorous and thought-provoking drama depicting the interaction between L.S. Baumann and James Gribble, and the romance between James Gribble and Dr. Florence Newberry (pictured). Gribble was the pioneer missionary to open up French Equatorial Africa to the gospel in the early 1900s.

The Central African Republic ambassador to the U.S., Emmanuel Tuaboy, was in attendance at tonight’s event, as well. There are currently about 1,200 Grace Brethren churches in the CAR, one of the highest concentrations of any country in the world.

Kathy Allison, of the Grace College & Seminary staff, produced the drama, which included some actors who are alumni of Grace, including Mike Yocum and Rich Wroughton.