Fight Club, the men’s ministry founded by Pastor Jim Brown at Grace Community Church, a Grace Brethren church in Goshen, Ind., was featured over the weekend in the Post-Tribune, a Chicago Sun-Times publication that covers Northwest, Ind. A portion of the story appears below. Click here to read the complete story. 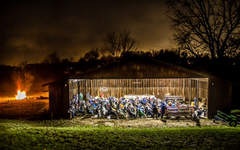 Nearly 200 men attended a midnight meeting inside a Goshen farm building as part of the 12-week spiritual program known as Fight Club. A number of local men took part in the program and are expected to take part in graduation ceremonies Sunday. | Provided photo~Sun-Times Media

This Fight Club is a real-life 12-week program for men who seek something greater than themselves by challenging their minds, bodies, spirituality and even their sexual purity. “By men, for men, to reach men,” as its manly mission states.

Its name comes from a Bible verse, Nehemiah 4:14: “After I looked things over, I stood up and said to the nobles, the officials and the rest of the people, Don’t be afraid of them. Remember the Lord, who is great and awesome, and fight for your families, your sons and your daughters, your wives and your homes.”

“The idea is that with God’s help we are fighting for our families, our churches, and our communities,” explained Eric Mathisen, a Fight Club member who graduates from the program today.

Fight Club can be called a spiritual movement that’s sweeping the country. Or a disciplined reminder of what it is to be a man. I call it an intriguing journey that strips men of their comfortable facades and lazy habits while rebuilding them to be stronger, more dedicated, and more devoted.