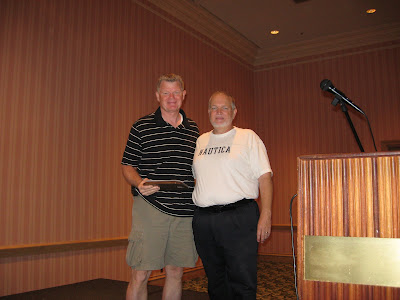 Pastor Ed Jackson of the Columbus, Ohio, area was awarded the Lifetime Achievement Award by the Association of Grace Brethren Ministers in its annual meeting Wednesday morning in Tampa, Florida. Jackson was unable to attend so his pastor, Rick Nuzum of the Powell, Ohio, Grace Brethren Church (left) received the award from Fellowship Coordinator Tom Avey on Jackson’s behalf. Here is the citation Avey read as part of the ceremony:

The Apostle Paul claimed that his service in the gospel was not voluntary; he was compelled by the call of God. Many years ago, an Ohio state trooper was near retirement; however God called this year’s recipient of the Lifetime Achievement Award to plant churches. It was a calling that he and his wife could not ignore.

The story of this man’s ministry is an amazing journey of faith. He wrote some of these accounts in his autobiography however it is also chronicled in the lives of men and women he has deeply impacted.

After a long career in law enforcement and a founding role in the establishment of the Worthington, Ohio, Grace Brethren Church, he pastored churches in places like Kenai, Alaska; Orlando, Florida; and Findlay, Ohio. He planted churches in Homer and North Pole, Alaska as well as having a significant role in the start of many other churches including Marysville, Ohio.

To talk with this year’s Lifetime Achievement Award winner is to learn stories of God’s faithfulness. While his book is full of these stories, even in his 80s he has not stopped taking risks for God. A year ago I called him only to find that he was in an interim ministry as the only English-speaking pastor in a Chinese church! Just a few weeks ago I sat in his family room as he reviewed facts about various cities around Columbus, Ohio, and the work he is engaged in to see new churches in those cities. I have never met a man of greater energy and of faith.

I learned early on that there are two secrets to this person’s success: Prayer and Polly.

I can guarantee that if you asked him how to plant a church or succeed in any kind of ministry he will say “Pray.” He prays like his ministry depends on it.

I also learned early on that this man isn’t worth much without his wife, Polly. I was shocked to watch the most grounded man I have ever known appear lost when Polly left for a few weeks to visit friends in Alaska. He was worthless!

Years ago this great man approached a young, untrained man and asked me to considering following him as pastor of the Orlando Grace Brethren Church. He assured me that God could use me. His words of confidence have been vital to me over 28 years of service. Much of my commitment to the FGBC is simply returning this gift of confidence to others.

We know how to teach theology and basic ministry skills. However we have never found a way to teach “faith.” It has to be caught. It is what Paul calls “from faith to faith” in Romans.

This man is a legacy of faith. As we honor him with this award we not only recognize a great man but we pass on a legacy of faith for those who follow. It is a good thing that we recognize the faith and faithfulness of Pastor Ed Jackson in the Lifetime Achievement Award from the Association of Grace Brethren Ministers.