0
by Liz Cutler Gates
From this morning’s Warsaw (IN) Times-Union. This is an excerpt. To read the entire article, click here. 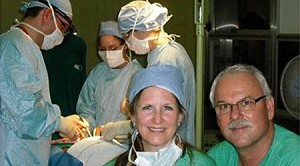 WINONA LAKE – Mike and Myra Taylor recently used their medical skills to assist with surgeries and treating patients in the Central African Republic.
The Taylors, Winona Lake, worked with an African team of surgeons and other medically trained missionaries from Columbus, Ohio, over a two-week period to treat more than 500 patients.
They also assisted in performing 54 major surgeries in operating rooms at a hospital in the capital city of Bangui.

They went with nine other volunteers, leaving Dec. 28, and returning to the U.S. Jan. 17.

Besides the Taylors, there were doctors from Ohio and two medical students who went.

Dan Guiles, a fourth-year medical student at Indiana University and a Grace College graduate, was one of the students who went.

The Taylors and other volunteers worked with Central African surgeons to perform hernia and gynecological surgeries. They also treated African patients who had malaria and parasite infections from poor nutrition and sanitation and unclean drinking water.

Mike has been a physician’s assistant for 29 years. He is employed part-time at Med-Stat, Warsaw, and has been employed full time as director of operations for Grace Brethren International Missions for the past four years.

GBIM is an international mission that works in more than 30 countries with focuses of church planting, Bible training and leadership development as well as orphan care and medical ministry. GBIM is part of the Grace Brethren Fellowship churches.