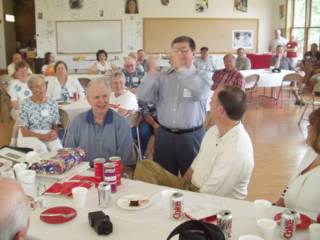 Terry Eichorst (standing), now in the insurance business in Houston, was one of Lloyd Woolman’s former soccer players who returned to the Grace campus this weekend to honor the former coach, who is seated, at left. Woolman’s son, Gary (white shirt), is seated at right. Eichorst presented Woolman with several cans of Steed additive (on table), which brought back memories of Woolman’s former involvement with the company.