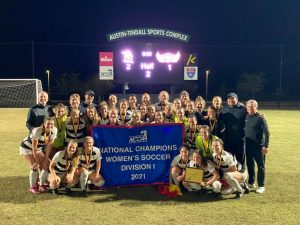 Grace netted a pair of first-half goals, then defended late in the game to defeat a talented Ottawa squad.

JJ Aalbue was named the NCCAA Tournament Most Outstanding Player, and Madison Tuma was named to the NCCAA All-Tournament Team alongside JJ. Alexis Larimore was a constant threat on the right side of the field in the first half.

Alexis made a dazzling, speedy run into the box and sliced her shot inside the far post, giving the Lady Lancers an early 1-0 lead in the sixth minute.

The game settled into a midfield battle for the middle portions of the half. Each team had a handful of dangerous advances, but few clear chances arose.

Ottawa’s best chances came from set pieces, including a pair of free kicks.

With nine minutes left in the half, Grace earned a corner kick. The play resulted in a header that glanced off the crossbar before being cleared away from danger.

One minute later, Grace doubled its lead. JJ split two defenders, sped by a third, and pounded her shot into the left corner of the net.

Grace claimed a 2-0 lead at halftime. Ottawa had seven shots, the majority from well outside the penalty area. Bethany Blackwood only needed to make one save in the first half to keep Ottawa scoreless.

Eight minutes into the second half, Alexis and JJ combined for a run on the right side of the field. The play resulted in a shot in the box from Madison that was saved.

JJ also had a few chances that came up empty, including a sliding chance and a free kick.

With 22 minutes remaining, Ottawa put serious pressure on Grace. During one of its first threatening moments of the half, the Spirit had a free kick. The deep shot hit the crossbar and then was headed in from close range to cut Grace’s lead to one.

With 15 minutes left in the game, the Spirit had another strong chance with a header. But Bethany made a full-extension save to push the ball wide of the net.

She made another save a few minutes later, charging off her line to deny an attempt in the penalty box.

Grace used its substitutes wisely in the game, getting key contributions late from Tory Calizo and Adelee Gartner to extend possession and help kill the clock. The Lady Lancers defended well down the stretch, allowing the clock to finally expire and secure Grace’s national championship aspirations.

Grace is coached by Michael Voss, the all-time leader in wins in team history.

Grace’s athletic department has now won eight national championships in school history, including six in the past three seasons.

A version of this story appeared on the Grace College Lancers’ Athletics Page. See the original post here.