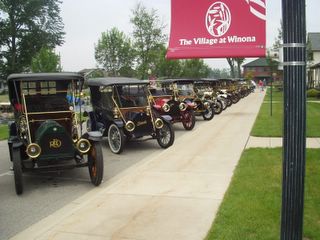 The approximately 35 “gas and brass” antique cars lined up on Canal Street in Winona Lake, IN, today were a reminder of the rich history of the town. Most were manufactured about 1912 or earlier, in the years Winona historian Steve Grill refers to as the “glory years” in the history of the town. The Winona Assembly and Summer School Association had just been founded in 1895, and financiers John Studebaker, H. J. Heinz and others were building the canal, adding a wing to the Winona Hotel, and building the Presbyterian building (1905) which today is the Westminster Hotel/Hall. Not until many years later (1949) would the young evangelist Billy Graham preach here, Youth For Christ would be founded, and other events significant in the history and growth of the evangelical church in America would take place.