Community play in the annual Wifflefest tournament sponsored by the Southview Grace Brethren Church, Ashland, Ohio, was held on Thursday, with the event’s adult tournament fielding 57 teams. A portion of a report on the day from the Ashland Gazette is included below. Click here to read the complete story. 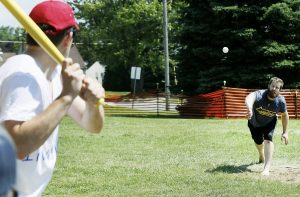 Although the 20th anniversary of Ashland Fourth of July staple Wifflefest officially began on Sunday with the Wifflefest Dedication Service followed by the business tournament on Monday evening, the tournament’s community play started on Thursday morning.

Wifflefest’s adult tournament, which began at 9 a.m., featured a total of 57 teams and took place on the specially designed fields on the property of Southview Grace Brethren Church.

The winning team of the tournament was Merican Made, which defeated Wiffle While We Work in the title game. The members of the Merican Made were Gabe Bradshaw, Beau Bradshaw, Tyler Dull and Bryar Maddie.

A total of 59 teams registered to play in the adult tournament, but two teams did not show.

Click here to see additional photos from the day, as published in the Ashland Gazette.