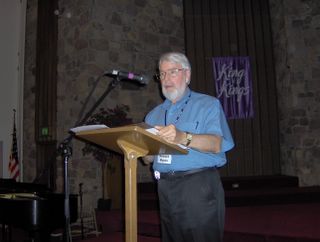 Pastor Howard Mayes was honored this afternoon by the Association of Grace Brethren Ministers (AGBM) with their Lifetime Achievement Award.

He also served as C.E. National Director for the FGBC, and was administrator of Lakeland Christian Academy in Warsaw, Indiana. Mayes has recovered from a life-threatening illness earlier this year, and thanked his colleagues, his wife, and his Lord for their faithfulness.