A Bible, A Dictionary, and a Testimony 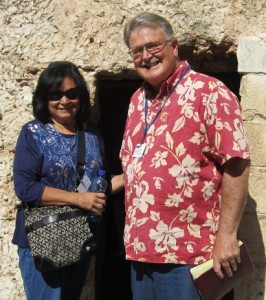 “Before I wrote the first [devotional] I threw away every sermon and lesson I had done over the past 33 years,” Paul Hoffman, a Grace Brethren pastor who is planting a church in Downey, Calif., while being involved with Community Grace Brethren Church, Whittier, Calif. (Richard Todd, pastor). “I thought it was time for a new beginning.”

Paul had a lifetime of experience before he began writing daily devotions that he sends to a list of subscribers. He and his wife, Lyn, planted three churches and he led a Bible school in the foothills in Auburn, Calif. For the last 11 years, he has covered USC football for Fox News and ESPN with weekly articles, interviews, and practice reports.

So what inspired Hoffman to throw away sermon notes and begin anew?

“I wanted to give testimony to the fruitfulness that God has worked in us, and for us and through Lyn and I and our daughters, Kathryn and Ellen,” Hoffman said,  “I wanted to write something just from the Scriptures and the understanding God has given me in my 68 years.”

Since the beginning, Hoffman has done this by using only the Bible, a dictionary, a concordance, and his personal testimony.

Hoffman began his devotional by introducing the topic of shepherding. He has since written on a variety of topics including: conquer fear; Jesus is coming; grief, guilt, and grudges; and many more from 12 books of the Bible and counting. He says that Lyn has kept and filed all 1,000 devotions that he has written.

Originally writing the devotional once a week for an audience of 22, Hoffman’s devotional is now published daily and read by thousands of people, both believers and non-believers. As for its success, Hoffman gives all the credit to God. “The only explanation I have for the devotional is God wanted people to read it… We need to share his truth and wisdom from the Bible, the whole Bible, and nothing but the Bible.”– by Grace Beight

(Editor’s Note: Grace Beight is an intern at GraceConnect. She is a senior at Grace College and is from Amherst, Ohio. This story first appeared in GraceConnect eNews. To subscribe to the weekly e-newsletter that includes news and information from congregations in the Fellowship of Grace Brethren Churches, click here.)