A Call Worth Following 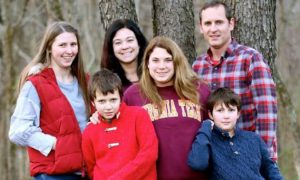 Zach Doppelt had pastored in Virginia for over ten years when, without much warning, God called him to pastor a Charis Fellowship congregation in Ohio. It’s meant a transition for his family that came out of nowhere. But to the Doppelts, this was a call worth following.

Zach moved to Dayton, Ohio, to pastor Basore Road Grace Brethren Church on September 1. Zach had been in pastoral ministry since 2003, and after earning a master of divinity degree he had been happily serving as pastor at Garden City Bible Fellowship in Roanoke, Va., for more than three years. The call to Basore Road GBC took the Doppelts completely by surprise.

“We felt, humanly speaking, that the opportunity in Ohio came out of nowhere,” Zach shares. “We were very happy serving the Lord for the last ten years in Virginia. However, the more we prayed and discussed the possibility, the more we were convinced it was the Lord’s leading. At one point we considered stopping the process, yet it seemed things kept going that way.”

Zach and his wife, Shannon, have been married for 18 years and have four children. As a family, they look toward a bright future at Basore Road GBC.

“Basore Road GBC has been through a lot over the years, yet the Lord has been growing them,” Zach says. “They had an effective interim pastor that the Lord used to help them prepare for the next steps. So, I believe together we are willing to grow closer to the Lord to carry out His plans.”

Zach states that effective, Spirit-led ministry starts with “doing the simple things well.” He believes this will help his congregation greatly as they move forward under his pastoral leadership.

He says, “The primacy of the Gospel, the authority of the Word of God, and the sanctifying work of the Holy Spirit are essential. From there we are called to love God and love others (Mark 12:28-34), which includes the carrying out of the great commission. If we focus on what Jesus says, I think we can worry a little less about programs – they will take care of themselves.”

Zach carries with him a most valuable lesson God taught him over the years of his ministry: unity and love are key.

“I believe when the Church embodies what I quoted from Mark, things go so much smoother. The challenges I have had in ministry have always been linked to a faulty understanding of the Gospel, failure to submit to God’s Word, or a lack of love for God and others. Christ’s command to love coupled with a church being a family (understanding their union with Christ and each other) is so important.

[Connect:] Click here to send a note of encouragement to the Doppelts as they continue to serve the Lord in Ohio.