A Christian and a Poet Walked into a Bar… 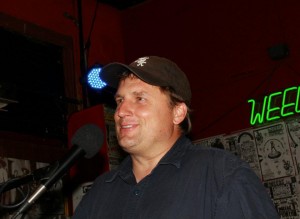 It always throws me off guard when someone at my school asks what my dad does for a living. He doesn’t have one of those “quick ’n easy” job descriptions: doctor, lawyer, teacher. There really just isn’t an answer I can give that defines my dad’s work without simultaneously causing people to make their own assumptions about what he does.

Dad, more frequently known as John Shirk, came to Chicago to start a church and help bring people to Christ, which technically makes him a missionary—except the term “missionary” causes my classmates to think of someone who travels to the jungle and lives in a hut. Shortly after arriving in Chicago he found himself in a bar attending his first poetry slam. (Above right, John Shirk (left) and J.W. Basilo are active in the Chicago slam community. Photo by Michelle Brinckerhoff.)

It almost sounds like one of those cheesy jokes: a Christian and a poet walk into a bar . . .

Which makes me want to avoid mentioning the bars at all. Churches don’t generally expect their missionaries to attend bars several nights a week, and while I don’t find it embarrassing, I know people will make assumptions about my father’s character, which lead to huge misunderstandings.

Enter center stage: A Sacrificial Poet, a memoir written by Dad and released on April 11. The book shares some of what my dad has learned doing ministry with poets in bars every week—although I’m not sure it explains everything Dad does. I’ve edited it several times (watch out for those commas, I still don’t think they all belong) and, after several hours of consideration combined with several years of observation, I’m beginning to suspect that Dad isn’t quite sure what he’s doing either. We’ve been in Chicago for more than a decade, so you would think he would have figured it out. Unfortunately for him (and, coincidentally, myself), every time he thinks he knows what’s going on, God surprises him with new lessons to learn.

It was only natural that Dad’s new love for poetry combined with his love for Jesus would result in his first book being released at Chicago’s first ever Jesus poetry slam. It was sponsored by a couple of evangelical organizations as well as the poetry slams he attends in bars around the city and Chicago Slam Works, an organization founded by Marc Kelly Smith, inventor of the poetry slam. It featured about a dozen of Chicago’s best poets performing their original poetry about Jesus. It wasn’t a Christian event. It included poems by both Christians and non-Christians, and the audience was a mixture of faith backgrounds as well. I guess you could think of it as 200 people from all walks of life coming together to ponder Jesus’ question, “Who do you say that I am?”

What does my dad do? He loves Jesus; he loves people. He loves the challenge of putting that love into action in unusual places.

And he writes poems.

And he wrote a book.

But I think the next time someone asks me, “What does your dad do for a living?” I’ll give them a copy of A Sacrificial Poet and let them try to figure it out for themselves. —by Elizabeth Shirk

The book is available for purchase through Amazon. Click here for more information.

Editor’s Note: Elizabeth Shirk just finished her junior year at Walter Payton College Prep in Chicago, Ill., where she runs on the track team and has plans of one day being an author like her father.