A Community Way of Life 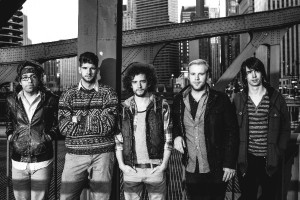 If you’ve ever met members of Last of the Wildmen, a folk/indie band from Fremont, Ohio, you’ll know that they put people first. Even their website description portrays their relational focus: “Last of the Wildmen is a community, it’s a way of life, it’s about every good thing left in this world, it’s about friends coming together having a great time.”

Kyle Kirchenbauer, 26, and Jimmie Getty, 25, have attended Grace Community Church in Fremont (Kevin Pinkerton, pastor) for many years. They were also a part of The Undeserving, a successful pop rock band with a major record label whose song, “Something to Hope For,” was featured on 2009’s American Idol promo video.  Phil Tabor, 21, joined Last of the Wildmen after being cameraman for Undeserving music videos for about a year, along with Sam Miller, 24. Matt Grabowski, 26, stopped playing with Last of the Wildmen this past February. They all serve on the worship team at Grace Community Church.

“Matt has always had a passion for live sound so he took a live sound internship,” explained Getty. “And he’s been running sound for a lot of local bands. Now he helps us record demos and helps us run sound at shows. I’d say his role has actually increased even though he’s not playing with us.”

What started as an outlet to play songs of a different genre than The Undeserving became their main project a few years ago. “Once we stepped back from The Undeserving we decided to pursue Last of the Wildmen,” said Getty. “At first it had been an acoustic folk side project. We started playing small shows that led to bigger shows…slowly but surely it started sounding more like a rock band.”

Each of the band members writes his own music. “I think the songs that we write are more overtly based on our faith [than The Undeserving lyrics],” noted Getty.  “[The song] ‘One of Your Sons’…is closest to my heart. I wrote that as an open struggle with doubt and the reward of faith…how each one is important.”

Last of the Wildmen (and friends) continue to pursue their dreams – whether music, art, video production, or live sound — and build lasting relationships with others…all for the glory of God.

Last of the Wildmen have two official releases: “Open Future” and “Ship Set Sail.” They are currently playing local gigs to raise money for an EP album they hope to record in the next year. However, they keep relationships at the center of their endeavors. “If success is your ultimate goal,” says Getty, “then you are never going to be happy because you miss everything along the way…you take everything for granted.”