A Connection With Tucson Shooting Victim 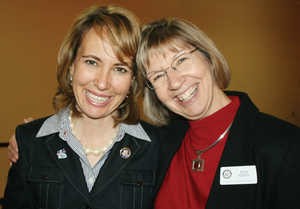 Maxine Peugh Currie, a 1970 Grace College music graduate originally from Harrah, Washington, was surprised to discover this connection with the recent Tucson shooting. Maxine is a sister to Grace professor Roger Peugh. This article is from the Yakima (WA) Herald-Republic.

Victim in Arizona shooting has Valley ties from childhood

YAKIMA, Wash. — After Maxine Currie learned that her childhood friend from Harrah — Pam Walker Simon — was struck by bullets in an Arizona shooting targeting a congresswoman, she began searching the Internet for details.

“I was sick,” Currie said when she got the news.

A part-time coordinator for U.S. Rep. Gabrielle Giffords — the target of Saturday’s shooting that killed six people in Tucson, Ariz. — Simon was struck by bullets in her wrist and collarbone, but her injuries were not life-threatening, Currie said.

She is in fair condition at Tucson University Medical Center, a hospital spokeswoman said Tuesday.

Currie graduated from White Swan High School with Simon, 63, in 1966. Simon’s mother was the librarian at Harrah Elementary School while Currie’s mother was a teacher there.

Although the two haven’t been in contact for years, Currie became worried when she learned of the shooting Saturday and immediately began searching the Internet for information.

“The first thing we did was check Facebook, and all these sympathy things like ‘We care for you’ were on Facebook,” the 62-year-old Currie said from her Cheboygan, Mich., home on Tuesday.

Currie said she then contacted Simon’s brother by e-mail, and learned that she had been shot in the wrist and the collarbone.

The bullet that struck her collarbone traveled through her body and lodged in her hip. No vital organs were struck and the doctors have decided not the remove the bullet, Currie said she was told.

“I was very concerned and relieved when I found out that she was still alive and OK.”

Currie vividly recalls Simon being heavily involved in student activities, and that the pair were among only five students in her graduating class of 42 students to attend college.

Simon had gone to the American Legion Auxiliary Girls State — a program that teaches young women citizenship. She was also a member of the high school choir, Youth for Christ group and honors society.

Both women left the area to attend college and went their separate ways.

“She was involved in every activity you could possibly imagine in high school,” Currie said. “She was a very good student.”

Simon eventually became a high school teacher in Arizona before retiring and becoming a part-time coordinator for Giffords.

Currie said she’s grateful her friend is expected to make a full recovery.

“Our whole church has been praying for her,” she said.