A Father’s Gift: A Road Trip and One-on-One Time 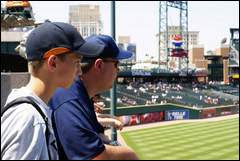 Sunday’s South Bend Tribune told the story of Jon Page and his 12-year-old son, Tim (pictured at right at Comerica Park in Detroit), who marked Father’s Day and Tim’s passage from adolesence with a 2,000 mile road trip. While they both love sports, the trip was more than an opportunity to see four major league baseball teams play in four cities in as many days. It was about spending time together.

Jon was inspired to mark Tim’s passage to adolescence in a special way by the Rev. Greg Serafino, pastor of Osceola Grace Brethren Church, who “did this with his three boys.” Jon is impressed by how they turned out: respectful, fun to be around and well-rounded. Jon remembers his pastor telling him it was an opportunity to “get honest discussions and have fun.”

Jon and his wife, Jennifer, make a point, Jon says, of communicating to their kids (Rachel, 8, and Jacob, 5, as well as Tim) “how valuable they are,” how much they are loved.

That vision grows out of their faith founded on the example of Jesus Christ, which Jon and Tim discussed on Saturday during their drive to Pittsburgh. Christ’s crucifixion was “a real hard and unselfish act,” Jon says he told Tim, which He did out of love. “In life, there are all these people … in a race to try to get in front of you,” Jon said, and then added that the best way to live is to imitate Christ and “put others in front of you.”