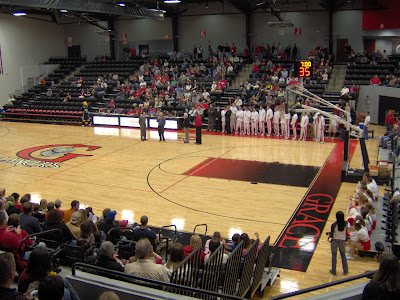 Prior to the first-ever men’s basketball game this Saturday afternoon in the Orthopaedic Capital Center on the Grace College campus in Winona Lake, Indiana, there was a ceremony of dedication of “Kessler court,” the hardwood playing floor in the new facility.

Kessler Court is named for head Grace basketball coach Jim Kessler, who has coached the Lancers for 30 years. Following the dedication the Lancer basketball team played its first game of the season against the Crusaders from Madonna University, a private, non-profit, Catholic university located in suburban Livonia, Michigan, on the western perimeter of metropolitan Detroit. The heart-clutching game was tied at regulation and went into overtime with Grace College eventually emerging victorious 90-88.

The next game in the OCC will be Wednesday, November 7 at 7 p.m. when Grace faces Illinois Tech.

It was a lovely sunny day in Winona Lake for Homecoming, and a “tailgate luncheon” of grilled burgers was available in the parking lot between games. Following the basketball games, there was an art exhibit open in the Mt. Memorial gallery, dorms were open for inspection by all, and a Homecoming and Brass reunion dinner followed in the Gordon Recreation Center at 5:30 p.m. Reunions were held by classes ending in the years ending with 2s and 7s.

The final event of the day was to be a brass reunion concert and dessert at the Gordon Recreation Center.