A Life Dedicated to Service 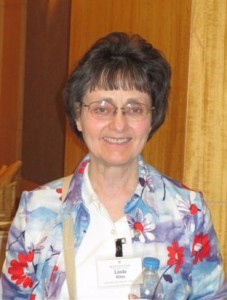 She’s been a teacher, traveler, and a servant of Christ. Linda Kline’s life is an example of what a true life of service for the Lord looks like. After 37 years, Kline has retired from teaching religious education, otherwise known as Released Time Bible, in the public schools of northern Wayne County, Ohio. Throughout those years she has influenced many lives for Christ – including nearly 500 students who prayed to receive Jesus Christ as their savior.

Kline, a member of Grace Church, Wooster, Ohio (Bob Fetterhoff, senior pastor), began her years of ministry in presenting the gospel to children while she was attending Grace College. To fulfill a volunteer credit, she worked with Child Evangelism Fellowship, leading Good News Clubs that taught the Bible to children.

After graduation, she taught two years science in public elementary school in Lodi, Ohio, then five years of math and Bible in a Christian academy. While she enjoyed teaching these subjects, she found Released Time Bible (RTB) the most enjoyable because she got to deal with “the eternity of individual lives,” she said.

After seven years teaching, Kline moved home to take care of her mother. She was ready for a different type of job, but her mother was the one who called the Released Time Bible program to say, “My daughter is available if you need her.”

RTB took Kline’s mother up on her offer. “I didn’t need an interview or anything.” Kline admitted. In that first year of teaching, Kline counted 1,396 students in 52 classes.

A five-year program, Released Time Bible allows children to participate in a Bible class during their school day. Once taught on school grounds, the classes must now be held in a facility off campus. During the half hour classes, kids learn the major stories in the Bible. Leaders are also able to pray with the children and work with them to memorize scriptures.

One of Kline’s favorite stories reveals God’s power was when the RTB group in Creston, Ohio, needed a new building. For two years, the children, volunteers, and workers prayed for a facility for their class to use. Ultimately, RTB was sold an acre of land for one dollar. The land was directly between the elementary and the middle school in the district, which was exactly what was needed to keep the programs for both schools. She said that when she told the kids their prayers had been answered they, “broke into applause.”

Kline is quite humble when talking about her years of teaching. “To God be the glory,” Kline said, “It was a God thing to get me started…I’ve been humbled that He has used me.”

Kline’s nephew, Rich Kline, praises his aunt for her years of service.

“I always remember how diligently she worked over the years,” he said. Once a RTB student, he is now the president of Released Time Bible in Wayne County. “Things come full circle,” he noted.

Kline has offered to be a substitute teacher for RTB. She says when she told the kids that she would be substituting they said, “We want a substitute every day.”

She says what she will miss the most about teaching is, “The contact with the kids. The smiles and the hugs.”

Outside of the classroom, Kline has visited 42 countries on mission trips and as teacher leader of high school students. She’s done everything from helping in kitchens to leading children’s conferences. She has also visited 49 states, with Mississippi being the only one she has not visited.

While Kline has retired from teaching RTB, she has not retired from serving. Kline still plans to continue leading Sunday gospel and missions lessons, after teaching children’s church for 37 years. She is helping seniors who need it and once a month she hosts international ladies at her house. She also plans to visit a friend in China next year. — by Melissa Sorensen