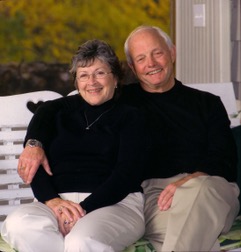 Duke Heller is a long-time member of Grace Polaris Church, a Charis Fellowship congregation in Westerville, Ohio (Mike Yoder, lead pastor). He has dedicated much of his life to sharing the Gospel and teaching other believers how to do the same.All Posts

He first came to know the Lord as his personal Savior at church under the teaching of Jim Custer, now senior pastor emeritus. In the Spring of 1972, Duke was out for a jog and passed by what was then Grace Brethren Church in Worthington, Ohio. When he saw that the parking lot was packed, he decided he and his family should visit the church to see what it was like.

Duke had believed he was a Christian his whole life, but he couldn’t remember ever making the decision to follow Christ. “Pastor Jim went on to say, ‘If you can’t answer that for your daughter, there’s a good chance you can’t answer it for yourself ’ and I knew he was right,” Duke said. 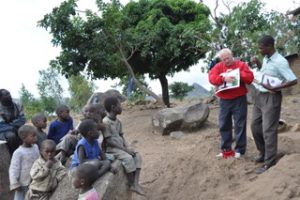 God had begun working in Duke’s life to prepare him for that encounter two months prior. One of his patients asked him if he was a Christian and when he made that decision. Duke responded that he’d been a Christian all his life and told the man all the areas he volunteered his time.

Duke has built an entire ministry on asking people that same question. He has shared the Gospel with thousands, asking them to pinpoint the moment they accepted Christ in their hearts. When asked what advice he would give to others about sharing the Gospel, he said: “You ask everybody – doesn’t make any difference who it is – when somebody says, ‘I’m a Christian,’ you ask them, ‘Can you point to the exact time when you accepted Christ?’ and if they can’t, you share the Gospel with them.” 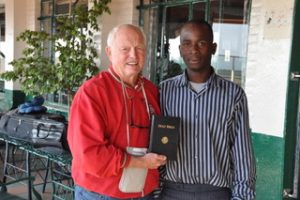 Duke has a great passion for telling others about Jesus. He has written a book about how to share your faith titled How to Start a Kingdom Conversation, and he has a ministry called May I Share where he offers training and resources to believers. He has a personal goal to share his faith with one person each day, although COVID-19 had made that more challenging than it used to be. Duke loves to strike up conversations with people in parking lots, checkout lines, and park benches. “I like to take every opportunity to share Jesus,” he said.

One way Duke would do this was by taking people out to breakfast or lunch. Not only would he minister to the person he was dining with, but he would always make a point to minister to their server as well. “We are about to bless the food; can we pray for you?” he would ask at the beginning of their meal. While paying the bill, he would follow up with the server and ask if they knew the exact moment they accepted Christ, and if the answer was no, he would share the Gospel with them.

This story first appeared in the GraceConnect eNews. To subscribe to the free newsletter that tells of God’s work in the Charis Fellowship, see graceconnect.us/subscribe. Duke’s book, How to Start a Kingdom Conversation, is available at bmhbooks.com/shop/how-to-start-a-kingdom-conversation, or wherever you like to purchase books. To learn more about his ministry, May I Share, visit mayishare.com.