“If anyone would have known me back then, I was that guy people would say there is no way possible that I would become a Christian. That was me.”

Adam Wright, who has attended the Grace Brethren Church in Canton, Ohio (Joe Cosentino, lead pastor), for almost a decade, leads Made For This Ministries, an evangelistic outreach that ministers at major public events. 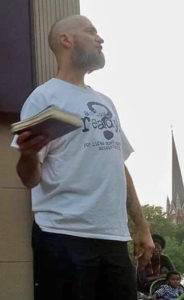 “It started off as a ministry to punk rock and metal kids,” he explains. “We were doing these Christian band shows and I would preach the gospel in between. When that ended, I realized I wanted to share the gospel with everyone.”

Wright was raised in a Christian home with loving parents. Bullied in high school, Wright found solace in all the wrong groups of people. After he graduated, he joined the Navy and began to identify as agnostic – which is when his rebellious streak took a sinister turn.

“My parents did everything right,” notes Wright. “But total depravity gets the best of us, and I ended up with a rebellious streak. I started a slow fade that just was a trajectory downwards.

“I got real messed up spiritually,” he recalls. “I lived a life of drugs, blasphemy, death metal, and everything evil I could think of. I got involved in the occult, I was miserable. I thought I was free from everything but I was literally in chains to depression. I even tried to kill myself.”

Needless to say, Wright didn’t last in the Navy very long. He returned home and got married, hoping to pick up the pieces of his life. It was then that the Lord started slowly drawing Adam to himself.

“He started making me realize that I believed certain things at the core. I couldn’t get past the concept that Jesus was coming back soon. That there was a Creator. I was raised to believe all those things and no matter how much I tried to suppress all that it kept coming back to me. I realized I couldn’t be a Wiccan anymore, and I cried out to God and he saved me.”

Today, Adam’s life is a living testimony to how God can heal, restore, and use His people to do his work. Now married with four children, Wright’s passion is evangelism, and his rough-and-tumble background becomes a launching point for sharing the gospel. Working closely with his 18-year old son, Caleb, Wright started Made for This Ministries eight years ago, attending events ranging from the local arts festival in downtown Canton to Pro Football Hall of Fame festivals, passing out gospel tracts, open-air preaching, and starting up conversations with people on the street. He also partners with the outreach team at Canton Grace Brethren Church, practicing evangelism in up-close-and-personal ways.

“We’ve had the opportunity to talk to lots of people and thousands of gospel tracts have been handed out,” he notes. “Quite a few church members are sharing the gospel on a regular basis as they go about their normal lives because of breaking the ice at a First Friday event.”

Wright considers their ministry one of seed-sowing, not about numbers of “conversions,” but letting God do the work of their faithfulness.

“We’re trying to encourage people in the churches to get out and share their faith. Once they get out on the street and start sharing the gospel, they realize it’s not scary, it’s actually amazing. If God can take that gothy, punk-metal kid that no one thinks can get saved, change his life, clean him up and put him out on the streets preaching the gospel, then who knows what else He can do when we obey Him.”

[Connect:]
Click here to send a note of encouragement to Wright and find out how you can pray or get involved!