A Profile of Courageous Leadership 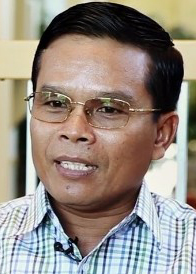 I was born in 1969 into a strong Buddhist family. We were farmers in rural Cambodia. When I was just six years old, the Khmer Rouge regime took power in Cambodia and destroyed my family and my country.

Along with all of the other children in my country, I was brainwashed by the Khmer Rouge. They taught me to hate even my own parents, and in turn, my parents hated and feared me. Many people during this time were killed when they were reported for disloyalty by their own children. In only four years, the regime enslaved the entire country and starved, tortured and murdered nearly a third of Cambodia’s population.

In 1979, the Vietnamese overthrew the Khmer Rouge and I was forced to become a child soldier. With other teens my age, I was sent out into the jungles to fight against hardened regime holdouts. I was given a gun — it was almost as tall as me — but no training. We didn’t learn any military strategy, only how to load the bullets and pull the trigger. This was a terrifying time for me, and I saw many of my friends killed or maimed. We faced all kinds of hardships: hunger, fear, disease, enemy soldiers and landmines.

I ran through jungles and mine fields and made it safely to a refugee camp on the Cambodian/Thai border. The camp was very crowded. It was only three square miles, but it housed nearly 200,000 refugees. At the camp, I diligently studied Thai, French, English and Buddhism. I almost became a Buddhist monk, and was responsible for the religious instruction of hundreds of people in the camp.

I heard the gospel many times in the camp, but my heart was closed to Jesus at that time. In 1992, the refugee camps were emptied and I returned to my hometown where I once again heard about God’s love, peace and forgiveness. The Holy Spirit opened my eyes, and I accepted Jesus as my Lord and Savior.

Upon conversion, I felt called into full-time Christian service. Although I had absolutely no knowledge about the Bible or Christian doctrine, I was accepted into the Phnom Penh Bible School, which was meeting in secret at that time to avoid government persecution.

For more than a decade, I served as a pastor, teacher and translator working with college students and training hundreds of young Cambodian pastors who are now leading congregations and ministries all over the country. In 2000, I was working as an associate pastor at Cambodia’s largest Christian church. Our congregation was partnering with Asia’s Hope, and I had the opportunity to meet the director, John McCollum, and other Asia’s Hope board members.

God began to turn my heart toward my country’s 500,000 orphaned and abandoned children — kids who live every day at risk of death, disease and exploitation. My job at the church was prestigious, and I was good at it. But I knew that God was calling me to leave my comfort zone and lay my career and my life down for Cambodia’s orphaned children. Asia’s Hope gave me the opportunity to trade in my previous ambitions for a new dream: to reach thousands of the poorest, most vulnerable children in the world and raise them up to be leaders in the Church and in Cambodian society.

[Connect:]
Asia’s Hope is currently pioneering a family-style residential care model that is expanding across Cambodia, and is being adapted for use around the world. Click here to read the full-length story and find out how you can pray.