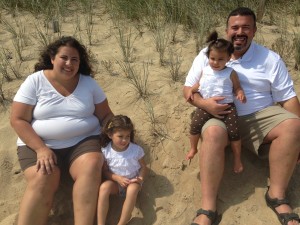 Phil and Jen Hill and family

Phil and Jen Hill didn’t know what to expect in 2012 when they uprooted and moved to help create Movement Church in Hilliard, Ohio, a suburb of Columbus.

Mark Artrip, church planter and pastor at Movement Church, wanted to create a launch team as soon as possible to get the ministry underway. Phil and Jen felt led to be a part of it.

“We shared with each other how we had been touched so deeply and how this felt like the thing — the next step that God was leading us to take,” recalls Phil.

Jen was eight months pregnant when they sold their home at a loss and moved to a more expensive area over 30 minutes away. “However, we knew we were doing the right thing, so all the effort and sacrifice that went into it was right,” Phil adds. “It was how God called us to use our time and resources. When you are walking the right path, it makes things that could be extremely difficult into very palatable and fulfilling work.”

Phil says there is a need in Hilliard for a church with lots of energy.

“There was no other evangelistic church in the area doing outreach to this community,” he stresses. “We now have the privilege of being a part of something amazing. God has done so much through Movement. I don’t know what the next five years has for us, but I do know we are right where we are supposed to be.”

What has been the result of their risk? “Simply put, the result has been a church,” says Artrip. “God builds His church, but I have prayed that Jen and Phil get to see little glimpses of how God has used and honored their obedience and gifts. We are a church that is accomplishing our vision to be a movement of people finding their way back to God, so every time we see a salvation story or a baptism or restored marriage, Jen and Phil’s initial investment and risk is the foundation. Movement Church wouldn’t exist without people like Jen and Phil taking risks.”

The Hills are glad they took the risk to be a part of Movement Church. Phil was able to keep his job at The Ohio State University, where he has been an associate director for the Office of Advancement for almost 14 years. Phil is currently the director of operations at Movement, leading teams in administration, finances, and first impressions. Jen is active in Movement Kids, as well as helping support Phil in every way possible.

“There is risk in everything we do, whether it is recognized or not,” Phil says. “There is risk in doing nothing. A lot of people think doing nothing is the ‘safe’ thing. In reality it can be the biggest risk. We risked a lot: finances, friends, relationships, etc. But the flip side of that is the risk of doing nothing is, in our mind, disobeying God. I had been called to things before and said no because of excuses, fears, and other priorities. So when you know what you are supposed to do and don’t do it, it is the biggest risk of all.” – by Alisha Gomez

This story was first published in GraceConnect eNews. To subscribe to the weekly e-newsletter that includes news and information from congregations in the Fellowship of Grace Brethren Churches, click here.