A Strange Brand of Happy: New Film Has Roots in Fremont Church 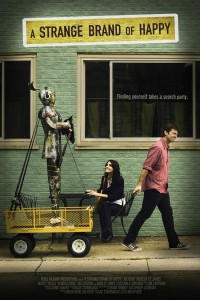 “Christian art? Art is art; painting is painting; music is music; a story is a story. If it’s bad art, it’s bad religion, no matter how pious the subject,” Newbury-medal-winning author Madeleine L’Engle once said.

“I wouldn’t call myself a Christian filmmaker,” he explains. “I’m a storyteller with a Christian worldview.”

Wise has spent most of his career working inside the church as a creative director and graphic designer. Currently he fills roles not only as writer, director, and producer of films, but also acts as chief creative officer of Rebel Pilgrim Productions. His new film is a quirky existential comedy that explores faith issues through the lens of laughter.

Pastor Joe Boyd, producer of and actor in “A Strange Brand of Happy” said, “It’s not a typical big budget Hollywood movie… and it’s not really a typical Christian movie either – there’s definitely faith beats and we think it will lead people towards conversations about God, but there’s no dramatic conversion scene. It’s just a fun, funny movie about that’s honest about faith.”

One of the most compelling scenes in the movie is when Boyd’s character, David, attends an open mic night hosted by his life coach and tunes in to a poet pondering the existence of God.

“Your smiles are simply signs of how sacred your life actually is,” says the poet.” He made you and he was happy – you make the Lord happy!”

“As a writer and as a human, I’m drawn to stories of people discovering their passion and coming truly alive,” says Wise.” I love the quote from Chariots of Fire where he says, ‘God made me fast — and when I run I feel God’s pleasure.’ I’ve had those moments and it’s essentially the theme of ‘A Strange Brand of Happy.’  We exist to tell stories that spark hope and action, and we’ll walk through any open door that allows us to tell those stories.”

The challenges Christian filmmakers face are the same as a secular filmmaker – capturing an audience. Rebel Pilgrim productions seeks to tell entertaining stories with authentic characters that people can relate to while sharing a message of hope. Because of the unique niche – and relatively new genre of faith-based comedy, getting the word out about the movie is one of their biggest challenges. To support the film and reserve tickets, visit strangehappymovie.com. — by MariJean Sanders