A Very Difficult Week in Akaland 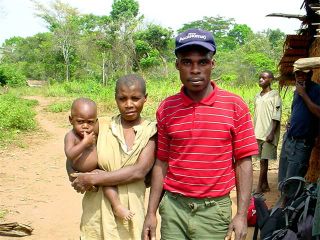 After Barb Wooler’s AkaLand Expedition in January of 2005, Balemagna (right) talked of wanting to return to that region to help start a church where his sister (left) was. Balemagna drowned this week in a controversial incident. Church-planting and pastor-preparation are well underway, even though this week’s activities have had sobering effects.

We have been posting updates from Miriam Pacheco and Barb Wooler, who are currently in the Central African Republic, working in ministry with Pygmies and with orphans. This latest dispatch from Barb contains significant drama and heartache—in one short week there have been, in Barb’s words, “adventure, death, missing bodies, murder(?), adultery, joy and sorrow, highs and lows all jumbled up three amazing days. The wild, wild west doesn’t have a thing over Pygmyland!” Here are some excerpts from her explanatory e-mail:

Tuesday afternoon (Feb. 22), Pastor Martin’s family was packed
up to move out to the main road where he had been called to be the pastor of
a Grace Brethren Church and also start a new Pygmy work. We figured the previous days storm had brought down some trees, but could not have imagined how many.

In all, 23 areas of the road needed to be cleared of tree, vines and debris, and we arrived at Bakota after seven long hours at 8 p.m.

By then all who had been waiting to welcome their new pastor were long gone as was all the stew and manioc prepared for the occasion; but almost instantly a crowd gathered.

Arriving home at Moale around noon on Wednesday, we washed up and took a nap. When I woke up, I opened the door–in Moale, my door being opened translates to “Open for business,” and within seconds one of our evangelists was at the door.

“Mademoiselle, have you heard?” “Heard what?” I asked. He went on to tell
me the tragic news that two of our Moale men and one villager who had hired them to hunt elephants with him had drowned that same morning. The canoe they had hired to cross a river tipped over in the water that had swollen due to the rain. One of the men was BALEMAGNA Jean-Marie, one of my dearest students.

This was the beginning of troubles. Soon it became apparent that the bearer of the news was also the one who paddled the canoe. In Africa, it looks suspicious if one is in an “accident” and doesn’t get hurt, especially if the ones who did get hurt or killed are lowly Pygmies. When it was evident that the messenger was the canoe paddler, he suddenly became a prisoner whose life was at risk. He was locked up in the chief’s hut as much for his own safety as for fear that he would try to escape.

Thirty minutes later Pastor Babay and I were walking into the dark, stuffy
hut where the “prisoner” had been locked into a room. The prisoner was
escorted out, and we all crammed together in the small hut as he gave his account. This man was no murderer, but he was lying. He said that our brothers had taken the canoe, and that he just saw what happened from the river bank. The further he got into his story, the tighter and more desperate his voice sounded, especially as he noticed that no one was persuaded that our guys had taken the canoe on their own. He often looked at me with eyes wide with fear as if he thought his fate rested on me.

I said, “I really wonder if this man is just lying because he is scared to death to tell the truth. We all know what fear is. It’s common to all of us.” At this point, the despondent “prisoner” in the adjoining room, who could hear every word, started sobbing. God was at work in this dingy little house, and hearts began softening.

Walking the rest of the way home in the moonlight, there was part of me that
was glowing in all of this heartache. I glowed with the a profound, pride for my brother, Pastor Babay, who had passed his first big test as head pastor of the Moale Grace Brethren Church, and that with less than one full day on the job!

At 1 a.m., we awoke to the sounds of a man yelling in an all-out fight. I arrived at the scene to see a young man being held back by several believers, the young man’s grandmother sat on the ground trying to catch her breath. Eventually I found out that the young man, also a believer, walked into his father’s house to find his married sister in bed with another man. (Most of the family was away.) After a few minutes, the young man collected himself and stormed away in the night. The next morning he and I and the pastors here determined it would be best to drop the woman off at the village where her father was, and let him deal with the problem.

Having dropped off the prisoner and the woman caught in adultery, I raced back to Moale for meetings with Jim Hocking. The Moale folks have been working for the last four months to prepare for a well to be drilled by Jim’s organization. We have dug 45 outhouses, and after this meeting with Jim, our team has some more things to work on. Jim’s visit not only provided more direction and encouragement to our well team, he was willing to give me enough diesel fuel in my tank to get me back to M’baiki. My extra trip out to the road had left us short.

Miriam and I came back here to help teach our evangelists, but it has been so crazy since we got here we have only had a few normal days to do so. Today (Friday) happened to be one of them. It is a pure PLEASURE to work with these men. Miriam and I team taught a advanced class on handwriting for our most promising men. It has been amazing to see their progress in just these few short days!

At 5 this afternoon we received word that the bodies had all been recovered. They were laid to rest on the banks of the river where they died.

PRAYER POINTS
Please pray that the believers in this community will be a strong testimony to others of mourning as those who have hope. There are a lot of pagan ideas surrounding death in this culture, and these ideas die slowly. Pastor Babay said the other day that the thing that sets Moale apart from all other Pygmy communities of believers that he has seen is transformed lives, people who no longer give themselves to drink and smoking pot. It would be wonderful if we can see evidence of transformation in this situation as our communities grieve for these men.

God bless and keep you. THANK YOU for your partnership in prayer,