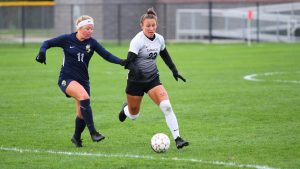 In just one year, Grace College women’s soccer freshman JJ Aalbue has grabbed the attention of the national soccer community.

Aalbue was honored as the NCCAA National Player of the Year after a record-setting season for the Lady Lancers. The freshman scored 17 goals with 18 assists in 23 games

Aalbue’s 18 assists led all players in the Crossroads League and ranked No. 7 in the NAIA. Additionally, that mark set the program record for most assists in a single season. After just one season, Aalbue already ranks in Grace’s top 10 for career assists.

Tkacz and Aalbue were also honorable mention for NAIA All-American. Tkacz was a mainstay for Grace’s defense, helping the Lady Lancers post 10 shutouts for the season. Tkacz, who had a goal and an assist, was one of six players to start all 23 matches.

Aalbue is the second Lady Lancer to be named NCCAA Player of the Year, following Mallory Rondeau’s honor in 2014. – from gclancers.com