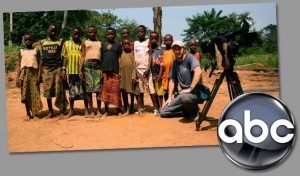 The work of founder Jim Hocking and Integrated Community Development International (ICDI), a cooperating ministry with the Fellowship of Grace Brethren Churches, will be featured in an ABC news special scheduled to air this Friday, December 17, at 10 p.m. eastern.

As a result of the publicity surrounding the Charity:Water Born in September campaign to raise awareness and funding for the water crisis in the Central African Republic (CAR), ABC News opted to pick up the story and develop it further.

One of the producers for the ABC News program 20/20, Miguel Sancho, was struck by what he saw in the Charity:Water campaign communications and videos. ABC News had just initiated a programming project in concert with the Bill & Melinda Gates Foundation titled “The Global Health Crisis.” This feature would highlight crisis situations from around the world and how governments, non-profit charities and non-governmental organizations like ICDI are working to “be the change” and save lives.

The first program in this year-long ABC news special will air this Friday, December 17, at 10 p.m. during the regularly scheduled program slot for 20/20. The work of ICDI founder Jim Hocking and his team of Central Africans will be prominently featured as a segment in the hour-long program.

You can read more details about this upcoming ABC News special event here.  See interviews from the field with Jim Hocking, lead driller Marcellin Namsene, and watch the ICDI drilling team and the rig “Faithful & True” in action.  Witness the tremendous impact that ICDI and its supporters are having in central Africa, this most desperate place in the world.

To see a promotion for Friday evening’s program, click here.

For more information about the work of ICDI, log onto http://www.icdinternational.org/