Above All, Be Blessed

Last year, the Grace Church in Wooster, Ohio (Nick Cleveland, lead pastor), started the #forwaynecounty initiative, a campaign encouraging small groups within the church to find a way to serve in the community and to get others involved as well.
Jamie Leach, a member of the church, is a part of a small group made up of four families, all with children around the same age.

“When we meet, we try to do something where our kids are a part of whatever service project we are involved in,” says Leach. “We want them to be able to see the fruits for years to come.”

Jamie, who is already actively involved in several service and community outreach projects, eagerly started doing research about a project her whole group could participate in. 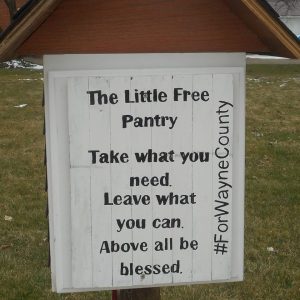 She came upon the idea of a “Little Food Pantry.” It concept utilizes a small, drive-up box – often resembling a large birdhouse – and allows community members to leave or take food items. She pitched the idea to her life group, and they got to work.

“We had a local carpenter build something for us, and made a sign with the #forwaynecounty logo on it. We used social media like Facebook to spread the word.”

At first, they had trouble finding a location for what they dubbed the “Little Free Food Pantry.”

“We did a lot of research and got turned down quite a bit,” Jamie notes, adding that a lot of businesses were afraid of liability issues. They finally found a place – the parking lot of a centrally located business in nearby Smithville, Ohio.

“It’s a well-known restaurant in the area, owned by a wonderful businessman,” Leach says. “His son is a lawyer, and was familiar with a law that protects Good Samaritans from liability. So, he let us put it on his property.”

To her surprise, the food pantry immediately took off.

“The community just came together,” says Leach. “Every day, more people would post pictures of it [on Facebook]…People would get really creative, leaving whole meals or coupons to local restaurants. There are some businesses in our community who have really jumped onto it, too. Church groups, businesses, 4-H groups, and schools have all contributed. 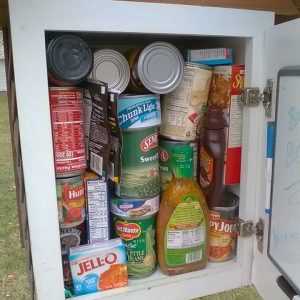 “Since we’ve put it up, three or four individuals have contacted me about building a food pantry. It’s catching and spreading.”

Leach says that the opportunities for service expanded beyond just the food pantry as well – like the woman who had just moved to town and was struggling with medical bills. Once the community caught wind of her need, she was barraged with groceries, Christmas gifts for her children, and even people coming out to fix her furnace. Another example is the business owner who allowed the food pantry to exist on his property. His parking lot was getting worn down from all of the extra traffic. Leach decided to post the need on the Pantry’s Facebook page, and within two hours, someone from the community came and graveled his lot free of charge.

Leach considers the food pantry a success so far, on all fronts.

“It’s been an awesome way for us to give back and let our kids be involved. But it’s also been the start of so many cool things. It’s not just, ‘here’s a can of beans’ – it’s the whole community.

“Sometimes we think that we have to do something huge to make a difference. But this is an example of something that wasn’t huge but it’s still impacted so many.”

[Connect:]
Send a note of encouragement to Jamie, and find For Wayne County-Little Free Food Pantry on Facebook by clicking here.