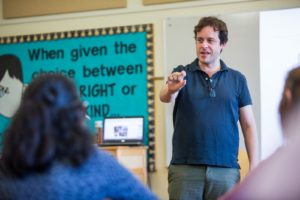 Dominic Gerrard, a member of Actors From The London Stage (AFTLS), gives a classroom workshop during AFTLS’s visit to Grace College.

On October 16 – 21, Grace College was honored to host Actors From The London Stage (AFTLS), one of the oldest and most established touring Shakespeare companies in the world. The team of five performed “Measure for Measure” by William Shakespeare and interacted with students via classroom workshops.

This was Dominic Gerrard’s first season touring with AFTLS. The unique teaching format used by AFTLS appeals to him. “It’s our job to try and hook the audience into the play,” Gerrard explained. “Americans seem to really like Shakespeare. There’s a lot of positive energy when we perform.” He also enjoys visiting college campuses and “crashing classrooms” with workshops.

Every year, AFTLS travels the United States to visit colleges. With each new location, the troupe must reorient themselves with the play they are scheduled to perform. Sometimes, there is a four-day gap between performances. “Upon arrival,” Gerrard said, “We usually practice for about four hours.” They bring what can be easily transported by plane: a single suitcase of simple props. Beyond that, the team requires only five chairs. “We turn that into an advantage,” Gerrard said, referring to the simplicity of the props. “We ask the audience to imagine and fill in the gaps.”

When preparing for performances, the single most-studied aspect of the play is the script — especially when the play is Shakespearean. “With Shakespeare,” Gerrard explained, “an actor can fall too far into the history of the play’s original time period.” Ironically, the actors prepare for drama by using more clinical techniques.

Peter Bray, another AFTLS member, commented on the power of Shakespearean language. “We read the play, mining deeper,” Bray said. “We ask, what are the character’s motives? What are his tactics to get what he wants? Then we try stuff until we find out.” What works in practice might not work in the performance. The actors spend hours deciphering what the script means.

There are layers of complexity in “Measure for Measure” that require an incredible amount of effort. For instance, because there are only five AFTLS members, each is required to play three-to-four characters. Sometimes, these characters overlap in a scene. Gerrard plays Gerrard plays Duke Vincentio, Froth, Barnardine, and a friar. “It’s really fun,” Gerrard said. “You have your major roles — mine is the Duke. We discovered that 30 percent of the play is the Duke talking.”

The overlapping roles are not a handicap. In fact, it is a welcome reprieve and challenge. “I swap from the Duke to the friar and Froth,” Gerrard explained. This style of acting is difficult but satisfying: he gets to play more than one character. “But it’s the audience that makes it work,” Gerrard added. When characters overlap within a scene, the audience must imagine that they are, in fact, different people. Otherwise, the scene falls flat.

Bray feels theatre is one of the most compelling mediums for story. “Theatre is one of a larger thing,” Bray said. “Stories are what’s really important. Plays may die, but stories don’t. They are a way of learning without feeling taught. Theatre is unique; it broadens our experience.” Unlike movies or TV, live theater is especially powerful. “It’s a mortal, unique, shared experience that happens once and then never the same way again,” Bray added.