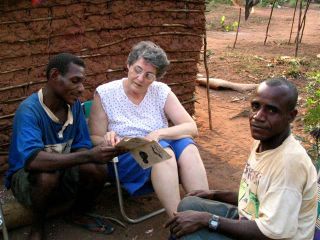 Miriam Pacheco (center) is assisting several of the most promising Pygmy students with their literacy lessons. GBIM missionary Barb Wooler says: “We had an opportunity to sit with three of our students to do remedial work with them yesterday afternoon. We were encouraged and amazed at how much these three fellas were able to absorb in that one hour, which makes us all the more anxious to get through this weekend and into a full week of school. By all indications, this will be a highly profitable time of ministry. We hope to see our most promising students pushing closer to the goal of becoming church planters among the forest people. In fact, I am feeling pretty confident that we are closing in on our prayer goal of having ten strong church planters. We are up to six, three of which are Bible Institute grads.”

GBIM board member Miriam Pacheco is currently in the Central African Republic for six weeks assisting GBIM missionary Barb Wooler in her ministry with the Pygmies and orphans. Here is the latest in a series of reports Miriam is e-mailing from the forest:

We’re here in the forest and settled in Barb’s little house. It’s not big, but roomy enough for two cots, two chairs, a table and some shelves, and room to walk around. We pulled in late this afternoon just before it started to get dark, so there are still some things that we need to rearrange tomorrow.

When we tried out the satellite phone system and were able to send the message that we arrived safely here, I just thanked God for the amazing things He has allowed man to accomplish! What a gracious God He is!

The little house in the forest is very comfortable. I’m sitting on a folding chair with the mini-computer on the table and a battery operated fan is sitting beside me to help cool. We have three nice-size louvered windows, so there is plenty of light and we hang a net across the door so we can keep it open for more air circulation.

We also have a solar panel that charges a 12-volt battery so we have two lights –one inside and one outside. But of course we don’t use them all the time. The buzzing, flying things love them! But the system also makes it possible to run/charge the computer, satellite phone, CD player and Dust Buster.

The moon and stars are absolutely gorgeous here! No other lights to interfere. The sky can seem very close when the stars are bright. And the full moon usually means we don’t need flashlights to walk the paths. It is so bright! I’m glad the full moon phase is coming up while we’re here.

This computer is about 8″ x 5″ so you know how small the keyboard and the keys themselves are. I keep hitting the wrong buttons because my fingers are long and they are used to moving certain distances to reach certain keys. But what a fantastic thing it is to have it here and be able to reach you halfway across the world from this remote place!

We left Bangui after lunch on Thursday and arrived in M’baiki in time for the last part of the afternoon session of their district conference. The guards at each stop along the road were very nice and gave us no problems ~ PTL! Barb says the current President of CAR has told them not to hassle the missionaries because they have come to help. Amen!

The church was packed and it was hot! As usual, they ushered us right up front to two seats they put there after we arrived, and soon the pastor of the church, who also happened to be the district leader right now, came and told us we would be sleeping at the Bible School. That’s the old M’baiki missionary property and they use the big house for the school and for the pastor’s home. We stayed in a little building behind where the guard used to live. It was three small rooms and they cleared everything out so we could put up our cots.

In the evening the Moale folks who were at conference come over and built a fire and we had sweet coffee and bread and lots of visiting. Our host brought us a bucket of water to use for washing and I was so anxious to get the dust and dirt off my feet I stuck my foot in the bucket before I washed my face. Barb had a good laugh about that! I’ll learn.

It is exciting to see how the M’baiki churches are embracing the Bayaka Pygmy church ~ this has not always been so, much to their shame. In the morning we attended the final conference session and the choir (seven people) from Moale sang a special number.

When someone is to be honored, some of the women will spray perfume on their shoulders and dance around them while they’re singing. That’s exactly what happened to the Moale folks! Another custom is to bring money and stick it in pockets or, in this case, they tucked coins under the headscarf of the gal who was leading the choir. Both men and women took part. The Moale choir people were so happy, and Barb was having trouble keeping the tears from flowing down her cheeks. What happened there was a BIG THING!

Then we found out that BABAY Jean-Marie, one of the Moale pastors, had preached at the opening session of the conference. That, too, is a VERY BIG THING!

That final conference session lasted four hours! Four hours in a packed, hot church with little tiny windows and narrow doors which people were standing in and cutting off whatever air might have come through them. And the p.a. system was distorted and loud and also buzzed.

After two lunches within a half hour of each other ~ the conference had prepared something for pastors and guests like us, and then our host had also prepared something for us ~ of rice, casa (stew – one chicken, one pork with mburu [like spinach])and bananas, we took off for Moale with four passengers in the back seat. An old man who lived in a town we would pass through rode along. Otherwise he would have had to sleep along the road somewhere and get home the next morning. BABAY and two mamas from Moale rode, too. It saved them the three-day walk back.

We had to cross the river on a ferry near Bagandou and when we got there it was on the other side of the river. We’ve crossed here many times and it is a good ferry with strong cables attached to both sides of the river, so we didn’t think there would be a problem. But the guys said they had to row the canoe over and hand-crank it back because something was wrong with the motor that pulls the cables.

In fact, it wasn’t even on the ferry ~ it was in the shop! So BABAY joined their crew and they cranked it back. Barb drove the truck on, and we all got across. Just a bit slower than usual. We’ll probably take the other route on the way out, unless we hear that the motor has been fixed and installed again on the ferry.

The road is pretty good in most places. I only banged my head on the window once! It’s now about a 4 1/2 hour trip—before it would take as much as 8-10 hours to get from Bangui to Moale. Thank the Lord for wonderful blessing of graded roads!

Thanks so much for your prayers. We count on them. One of the things most Africans say to me, and especially the Bayaka people, is, “When you go home to America, please do not forget us and remember to pray for us.” And I know you are.