Africa Report: Getting Ready for the Election 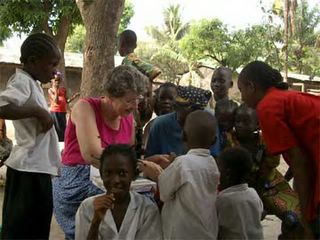 Miriam Pacheco, shown here playing educational games with orphans in the Central African Republic, is currently on a six-week trip to the CAR to assist GBIM missionary Barb Wooler in her ministry with Pygmies and orphans. Here are excerpts from Miriam’s latest e-mail report:

Let me tell you a little bit about what’s happening around the city of
Bangui. The elections are scheduled for this coming Sunday and there has
been a lot of campaigning, with 11 candidates. Some of the Africans who work at the Mission say they’re having trouble getting a bus to come to work because the campaigns have rented a lot of the buses. Some of the neighborhoods have had political rallies going on so that’s made it a bit difficult to get through.

We heard that one of the candidates was giving away free fabric in exchange for your voting card number. Would a candidate really buy votes?!

The buildings around the city are looking better than I’ve ever seen them. The gas station just up the street from the Mission used to look like a run-down, forgotten shed with a cracked concrete driveway. But now it is a beautiful red and white building in good shape with a landscaped driveway area and a couple pumps that look fairly new. The attendants even wear red uniforms and look right spiffy.

And I’ve counted traffic lights in at least four intersections! Buildings are being repainted and walls rebuilt with very nice decorative touches. Corners and monument circles are being landscaped and painted. Small but sturdy, permanent booths for shops are being built along some of the main streets instead of the little wooden tables and booths built from scraps of plastic or tin.

In one of the grocery stores the other day we saw convenience food–a box
of hamburgers in buns ready for the microwave. There were four in the box and it cost $12. We’ll be making our own, thank you! But the shelves are well-stocked and with some interesting Western things like Pringles, cans of diet coke, and small frozen pizzas. There are also many Arab foods because a lot of Islamic Arabs are here now. And some Syrians and Lebanese are also opening stores here.

A very important man in the CAR government lived right across the street from the Mission. He had been an Ambassador to France, Germany and the USA. He died sometime in the past week, and I’ve heard 2 stories–1) he died in America or 2) he died in France. Wherever it was, his body was flown here on Sunday and the mourning began—mostly includes loud music for days – all 24 hours of each one! So Sunday night was a no-sleep night.

Thanks for your prayers about the orphan care being set up here. It really is going well and I am getting to know the four gals working with Barb & Ginger. You can see them on the web at www.womenofcharis.net They are really neat gals and they are getting the vision for how they can influence the lives of the orphans in their churches and neighborhoods. Pray for them to have wisdom and strength–all of their husbands died of AIDS so that puts them in great jeopardy. But they have a heart for God and these kids and He will use
them greatly.