Africa Report: Over the River and Through the Forest 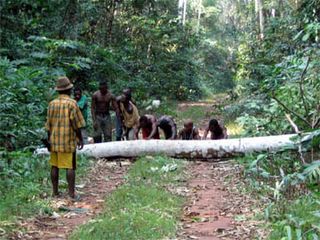 Barb Wooler, GBIM missionary to the Central African Republic, is currently involved in church-planting among the Pygmies in the forest. Here is an edited version of her experiences of the last two days:

Yesterday I left Bangui at around 9:30 a.m. headed for Moale via Nguma. In
spite of plenty of experience to the contrary, I left with hopes that it
would be an uneventful, relaxing trip, but, well, let’s just say that I had
yet one more humdinger of a trip.

CALL ME LITTLE CHOPPER
Driving down to the ferry on a heavily traveled road, I came upon a hardwood tree blocking my way. As I walked back from examining situation and grab the axe and machete out of the truck, I fully expected to see one of God’s angels happen by. It ALWAYS happens that way. But, the angels not having appeared yet, I set myself to chopping.

Halfway through the main branch across the road, I spotted three men walking toward me, bearing heavy loads on their backs. I say to myself, “Well, there they are! Thank you Lord” assuming they were the dark-skinned angels I was waiting for.

Well, if these were angels sent by God, they weren’t listening very carefully, because after greeting me and asking what I was doing, they continued on their way. I couldn’t believe it! That never happens. So I continued chop-chop-chopping. Finally, with one good-size cut yet to be made, three men drove up on small motorcycles. Within ten minutes the road was clear, and I was on my way.

FERRY POWERED BY “PULL-IES”
Down to the ferry. The motor is broken. The guys are willing to pull me across “for a price.” They pulled me across the 200-meter river by rope, with a constant flow of gripes about how little I was paying them for all their hard work. Driving off the ferry and into the shallow water, I climbed the bank of the river and was on my way to Nguma.

NGUMA
Back in October we sent a team to Nguma (about 45 miles from Moale) to minister to the Pygmy people there. Some of these folks had already received some teaching from us in the past; others were “Grace Brethren” because they had been baptized at a local Grace Brethren church in 1989 when I was just starting the Pygmy ministry.

The issue came to a head a couple months ago when some of the people of Nguma started raising a building to house a new Grace Brethren church. When they “planted” the first sticks in the ground, that’s when it got crazy. In the end, the new church building ended up as a pile of sticks on the ground.

You’d have to be here to catch the humor and drama in all this. But you aren’t, so let’s just leave it at this: if you ever hear of someone wanting to do a film entitled, “The Keystone Cops Go A-Church Planting,” please refer them to me; I have more than enough material for a full-length film with several sequels.

NOT A LAUGHING MATTER

+ PRAY for me and the pastors as we will be going to Nguma to resolve this
situation this Thursday and Friday (March 17-18).

+ PRAY especially for wisdom in knowing who, if anyone, we should place there to minister to these people, to lead many of them to salvation, and others to maturity in Christ.

+ PRAY that a crafty, slick-willy, smooth-talking, not-to-be-trusted former disciple of ours will not be allowed to dominate that church. Let’s just say we don’t hold him up as one of our prize former students.

LEAVING NGUMA
Back on the road again, and I take on board a friend who wants a ride back to Moale. Now I’ll have help with the trees and company on the journey. Drive a little further, pick up a small family; the husband is one of our students. Drive a quarter-mile more, come around a bend to find a monster tree across the road. It happens to be right where a small group of Pygmies and a tall African live.

THE BIG GULP
As the twilight grows deeper, the men search to find a way through, over, under or around the monster tree. The tall African walks around with them giving his doom-and-gloom assessment, “I’ve been looking at this since it fell three hours ago and there’s no way through this without a chainsaw! No escaping it: you’re here for the night!” To be honest, I was certain we’d be sleeping there, as well.

Well, they decided that if all the forest people would pull together, we could cut our way around it, but it would require dismantling the villager’s chicken coop, and driving a little east of his outhouse (consisting of a deep hole without a “house”) and clearing foliage, trees, brush, and finally, making eight cuts in 12″ – 18″ diameter, hardwood tree trunks.

That’s what stood between us and our own beds back at Moale Those dear folks sure put their backs to the task! In a little under two hours, I was putting the Pygmy-mobile, a Toyota 4×4, to the test, pulling it through the detour they had hacked through the forest. It wasn’t pretty, but the truck and I both made it in one piece, and when I rolled out on the road and got out of the truck, we all exploded into cheers and applause.

LAST OF THE BIG TIME SPENDERS
I was happy to give them 1000 cfa ($2 US) to party with — although there is no place to buy anything out here. The head guy said, “Mama, we accept this as your thanks, not as pay, because that’s not why we did it. We did we did this because we don’t want you to be uncomfortable tonight; This was work we did for God.”

Isn’t that neat? It meant a lot to me to see that kind of heart, especially after my experience with the guys on the ferry.

Please remember us in prayer Thursday and Friday, that if God wills it, we
soon will start a new Grace Brethren church at Nguma, and if so, that God
will show us who should lead that new work. PRAY that it will be done in a
non-combative, non-threatening way that will please the Lord and bring
resolution to three months of tension.

God’s best to you all and THANK YOU for your partnership in prayer for the
People of the Forest.