Africa Report: The Story of One Orphan 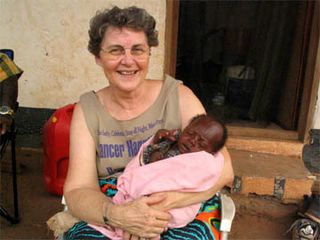 GBIM board member Miriam Pacheco this week concludes six weeks of ministry in the Central African Republic with missionary Barb Wooler among the Pygmies and with orphan-care. Here is an edited version of her report from yesterday. More information and photos are at www.womenofcharis.net.

Balo-o, lango ndjoni? ~~ Hello, did you sleep well? (a common greeting in the morning which also asks “how are you?”)

I want to tell you about a little boy I’ve met. His name is Dieu-Beni (God Bless), 12 years old, and he is in one of the orphan groups we’ve been visiting. His story is tragic! Both of his parents died of AIDS. Because of the deaths of some aunts and uncles, he lives with a single aunt, Ester, two of his dad’s younger brothers, another aunt, and seven others who are a mixture of siblings and cousins. At one time there were ten children altogether, but two have died.

Before his parents died, Ester (dad’s sister who could not bear children so her husband left her) came to live with them and they had all pooled their resources and purchased a home together. After Dieu-Beni’s parents’ deaths, Dieu-Beni’s father’s older brother came and took the house away from them and kicked the whole bunch out! That’s one of the tragic “approved” customs of this society. So Dieu-Beni and the collection of relatives who have become his family live in a rented home.

Ester has a job at an orphanage not too far from the Mission so she has a source of income, but it’s not near enough to take care of all the kids, rent, and needed medicine. Some months ago she took out a microenterprise loan from a program that GBIM has available and bought a pouspous (a two wheeled cart used to haul things to market) to be able to sell something (I don’t know what product she had in mind), but the older brother came and took that, too. Sometimes it’s hard to understand why God’s payday doesn’t come around every Friday! But who among us hasn’t benefitted from His loving mercy?

Another tragic component of this little guy’s life is AIDS ~ he’s very sick. He looks like an 8- or 9-year-old, and is often too tired to even smile. Project Hope & Charite, the GBIM orphan & window care program, is supplying him with some meds and vitamins and some nutritious food. His aunt is very concerned about him and seems to take good care of him as much as she is able. We visited with him in his home and he seems comforted by his loving family and their care.

Last week when we had the orphan group coloring pictures for their Stateside sponsors, I saw Dieu-Beni smile! He was having a wonderful time and entered into the project with enthusiasm. His pictures are quite good and I will be privileged to take them home to the kids at WLGBC who are his sponsors. Pray that this little man will learn to love & trust God.

The effects of the political troubles in recent years are still being felt by the believers here, especially those whose burden is evangelization. There are no Sango or French Bibles available in the city. They were all destroyed or confiscated during the war. The only thing that the African-run bookstore located here at the Mission has available is a few French New Testaments.

There is a Bible Society here where they used to be available, but the supplier in the States (and maybe Canada and/or Europe as well) will not deal with them any more because of irregularities in their way of handling finances. This kind of thing is a continual problem here.

I guess the Society in the States has given the ICDI NGO permission to get orders from all the missions here in Bangui and they will ship them direct. I hope it happens soon because there is a great need for them here. I know GBIM has earmarked some money for that purpose with the goal that the profit from them will be put back into the literature work to enable that work to stabilize and be productive once again.

Your part in the ministry is so important! Pray that we will finish well with the orphan care things that need to be done before we leave. It’s just a little over a week now until we board the plane!

Barb returns from the forest tomorrow (Friday) and she will need to tie up some loose ends with the Project Hope & Charite committee before we go. We have been able to spend time with the first group that was established last fall, register all the 150+ kids in the three new groups to present them for sponsorship when we return to the States, and prepare the way for another group to get started.

God is working in the hearts of the African ladies to fulfill their mission of caring for these dear children. Pray that they will remain strong in Him, be able to keep up with the physical demands of their work, and be encouraged in their labors of love.