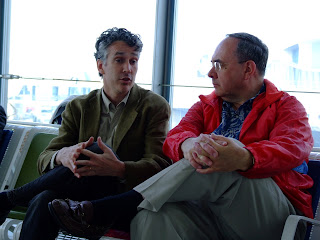 After an overnight stay in Paris, I connected with Greg Burgess (left) on Thursday, May 31 for the flight to Yaounde, Cameroon. Greg, who is originally from our Columbus, Ohio, church, lives in Lyon, France and works with Editions Cle, the Christian French publisher which has been affiliated with the Grace Brethren churches.

Greg is the organizer of the trip–he brought with him two companions, Didier, and Jean, who will teach illustration and scenarios and photography, along with my teaching of magazine article writing.

Our goals are several. Greg has helped found a magazine for African youth in Sub-Sahara countries, so he is looking both for writers and illustrators to contribute to the magazine, and also for good distribution channels and influencers to help spread the word.

We are also compiling on this trip an archive of photos of African youth and scenes which can be used in future editions of the magazine. But one of our main emphases is to gather Africans who are interested in writing, and to inspire and encourage them to create indigenous works–articles, graphic books, book manuscripts–that are written by Africans, to Africans, using African phraseology, thought patterns, etc.

We’ll be in Cameroon for approximately a week where we’ll have several days of classes with about 25 students, and then we’ll take a small-plane flight to Central African Republic where we’ll spend another week with about 20 students there, learning principles of writing, editing, production, and much more.

This is the first of a series of reports of the trip, which ended Friday, June 15.