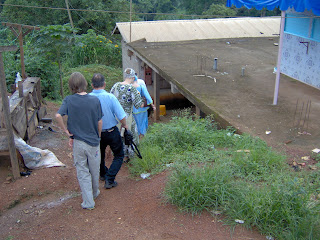 The sun shone brightly and the acrid smells of open fires were everywhere as Frank Puhl picked us up in the mission pickup truck on Sunday morning, June 3, to go to a newly-formed Grace Brethren church.

We stopped along a busy highway, and filed down this pathway and embankment to the area under the concrete slab, which is where the congregation met.

The church, in the community of Odza, is only several weeks old. There were 105 in attendance, plus several chickens who wandered through. Because it is new, there were passers-by who wandered in as far as an hour into the service.

At testimony time, several people popped up and praised the Lord that the church had been founded, saying they had been waiting for some time for a church in their own neighborhood so that they wouldn’t have to take a taxi to other locations in the city to worship.