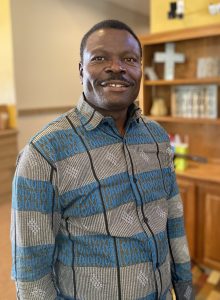 In the nearly 50 years since the Brethren Biblical Seminary and four Bible institutes have ministered in the Central African Republic, thousands of African pastors have been trained for ministry. Students have not only come from around CAR, but from in Chad, Cameroon, Congo, Rwanda, Mali, and Senegal, according to Dr. Francois Ngoumape, dean.

In 2008, the seminary relocated from Bata in Bouzoum to the capital city of Bangui. Currently, there are 40 students in the men’s department and 34 women in the women’s department. The wife of a pastor who is enrolled in the seminary also receives training, “so their ministry can be done together,” says Dr. Ngoumape, 54.

Students may enroll in a three-year bachelor’s degree program or seek a more specialized master’s degree program. “There are pastors who are coming to be trained on the master level in different specializations, such as practical ministry, youth ministry, and training to be a teacher of theology,” he adds.

A faculty of 12 leads the classes. Six are full-time, and six are part-time and pastor a church in addition to their teaching load.

When the decision was made to relocate the seminary to Bangui, the Central African government donated 40 acres of land on the north side of the city. As a result, the James Gribble Training Center was constructed. “We are thankful for that,” notes Dr. Ngoumape, who has been dean of the seminary since 2002.

He says that gifts from people in America and the CAR churches made the building possible. A dorm provides housing for 12 families, but he’d like to see more. He has a goal of building 20 duplexes that would allow them to host an average of 40 new students on campus.

“By God’s grace, we have six duplexes now,” he notes. “We are thankful but have a ways to go.”

In the summer, when school is not in session, the campus is active with programming operated by local churches. Young people come to the campus from throughout the country for retreats and training.

There is also a need for an auditorium on the campus.

“As you heard about the size of our fellowship (more than 3,000 churches), we need a large facility for our conferences,” he says. He also hopes that it would also be available for use by other groups. “It would create a good bridge between other Christians in our cities and us,” he says.

Eventually, he’d like to see schools for elementary and high school students on the campus in addition to expanding higher education opportunities to create a Christian university that not only helps believers but be positive for their country.

How can we pray?

“First, I would like to ask you to pray for myself that I will have enough strength and remain faithful to the Lord and in his ministry,” he says. “Also pray that the Lord may send more and more students to be trained to have the local churches to grow. Pray that the Lord may provide what is needed for the training of our teachers also, and students, also for building and structures that can host different people on campus.”

Dr. Ngoumape appreciates the partnership with North American churches in the ministry in Central Africa. “That is one of the great and good things for the Charis Alliance that we are holding hands worldwide to do the ministry,” he says.

(Editor’s Note: Students who attend the seminary and Bible school are supported by gifts from their districts and local churches, as well as through The Timothy Project, which allows North American donors to sponsor a student and his family. With the new school year comes a new influx of students and more sponsors are needed. For more information by contacting Coordinator Dave Martin at dmartin@encompassworld.org.)