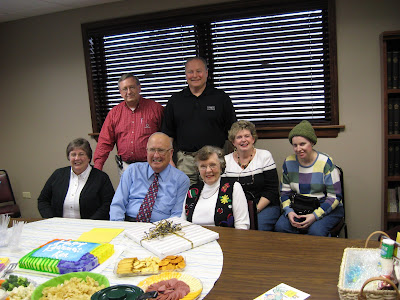 After 50 years, Ken Herman (seated, blue shirt and tie) has retired from a fruitful and faithful career in Christian publishing. The staffs of Brethren Missionary Herald Co. and the Fellowship of Grace Brethren Churches celebrated Ken’s retirement today and invited a number of his family members to participate.

Seated to Ken’s left is his daughter Judy Daniels, who edits communications and the alumni magazine for Grace College and Seminary. Her husband, Denny Daniels, in red shirt, is standing behind. To Ken’s right is his wife, Kathy. Seated immediately behind Kathy is the Hermans’ other daughter, Cindi, with her husband, Don Fluke, and their daughter Bethany.

Ken Herman was working as the managing editor of the Dayton (OH) Shopping News (one of his co-workers was the humorist Erma Bombeck) when he was called to Winona Lake, Indiana, to join the staff of the Brethren Missionary Herald Company as assistant to the editor, Arnold Kriegbaum, in June of 1958.

Later, in 1961, Herman was named business manager of BMH. During those years a BMH Quartet traveled and sang in churches accompanied by Kriegbaum and Kriegbaum’s wife, Laura. Members of the quartet included Herman, Leland Larmon, Sherwood Durkee, and Wayne Guthrie.

Herman served with BMH for 33 years. When BMH’s print operation was sold to Evangel Press of Nappanee, Indiana, in 1991, Herman went with Evangel in the area of print sales and served there until retiring this March 31. Evangel has leased office space for Herman in the BMH building, enabling daily contact with BMH and FGBC staff.

Ken and Kathy Herman, their two daughters and families are all longtime members of the Winona Lake Grace Brethren Church.

BMH salutes Ken’s many years of faithful and congenial service and wishes him well in retirement.