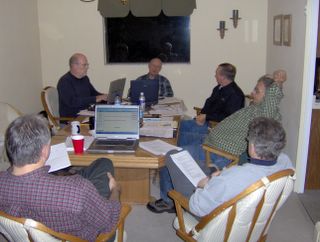 Led by AGBM president Tim Boal (lower left in photo), the group is working through a large number of recommendations from its research and development consultant Jerry Young (center of photo, beneath window) regarding adopting new bylaws, setting up a board of directors, redefining membership, and much more.

A forthcoming newsletter to the membership, to be mailed before Christmas, will include further details and updates.