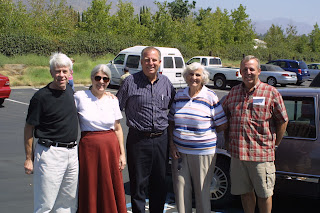 Pastor Roy Halberg (center of photo) of the Grace Brethren church in Alta Loma, California, recently took a group from his church down to San Diego to see the Dead Sea Scrolls. In the photo, from left, are Roger and Jayne Baer, Halberg, Halberg’s mother, Louise Halberg, and Carlos Lascaibar. Here are some of his reflections:

It was pretty impressive.

It included a “virtual tour” of Qumran . . . a video presentation depicting what archaeologists believe Qumran looked like 2,000 years ago . . . ceremonial baths, the scriptorium where scrolls were written and/or copied, a community dining room, etc.

There was also an archaeological exhibit showing what it was like to find and excavate Qumran. This exhibit also included photos describing the process of piecing together the scroll fragments, preserving, and translating them. What a task!

The scrolls themselves were difficult to see and read in the dark lighting conditions they presented. Still, looking at copies of scripture from 2,000+ years ago is pretty awesome. I remember one sign posted over a scroll that contained 51 of the psalms. It stated that this scroll of the psalms demonstrated that the psalms we have in our Bibles are unchanged from those written on these scrolls 2,000 years ago.

I’d been to the Shrine of the Book in Israel and I figured this would not measure up. It wasn’t quite the same . . . but it was well worth the time and the $28 to see it.

Halberg concluded, “Sorry that you’ll miss it. I don’t think they are planning to bring the exhibit to Winona.”