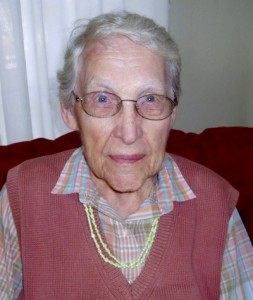 Word has been received that Alys Anne Haag went to be with the Lord June 6, 2014, in the home of her youngest daughter, Sandra, in Whittier, Calif.

Alys was born in Altoona, Pa., September 11, 1923 to Chester and Reba Lickel. January 1, 1947, she was married to Walter Haag whom she met while working as a nurse in Puerto Rico. They remained there until 1949.

She and her husband were missionaries with Grace Brethren Foreign Missions (now Encompass World Partners) to Mexico from 1951 to 1983. During that time she was known as Aunt Alys as she sent information to the Missionary Helpers in the Brethren Missionary Herald magazine.

From 1984 to 2004, she did volunteer work at the Brethren Camp in Mexico and also volunteered at Wycliffe in Dallas. Alys’ son Doug is a pastor, and daughter, Sharon, is on staff with Wycliffe.

In addition to her three children she has four grandchildren. Her children describe her as a teacher, discipler, evangelist, and counselor. She was a strong woman of faith, action, character, and prayer whose life was focused on eternal values and whose confidence was in the Lord.