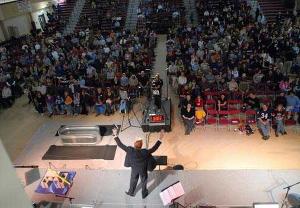 HOW THIS CHURCH BEGAN

The seed of ChangePoint was planted in 1989. Some members of Anchorage Grace Brethren Church on the Hillside wanted to establish a smaller church closer to the highway. Their pastor would be Brian Chronister, a local man embarking on his first ministry.

They gathered on the second floor of a bank in a strip mall near Seward Highway and O’Malley Road, recalls Linda Bray, a current ChangePoint member who was there.

The ministry took root, calling itself Grace Community Church. When their numbers outgrew the bank, they moved next door to the vacant Food Land grocery store, which they also soon outgrew.

Finally, in 1993, they built a spacious new home at the corner of Lake Otis Boulevard and Sentry Drive, where weekend attendance at four services eventually topped 3,000.